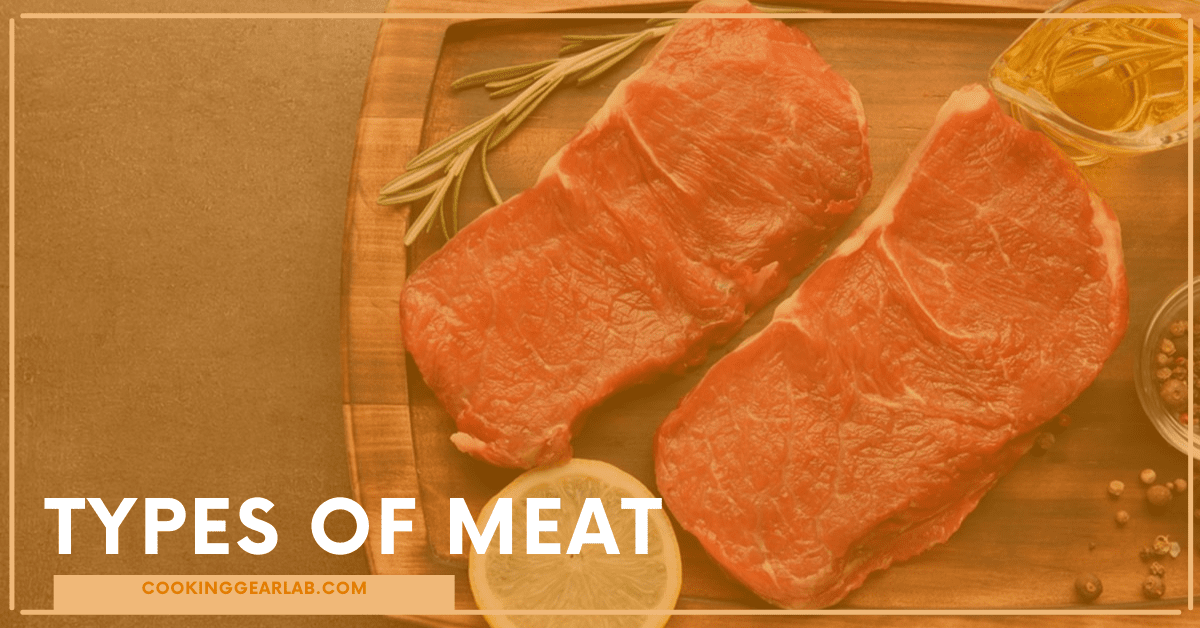 Although many people nowadays have emerged as vegetarians and even vegans, earlier that wasn’t the case. As our ancestors depended on meat to survive. And we refer meat to the flesh of animals we consume. Because it was the only source of protein and fat they could get. In recent times, we have experimented with meats a lot. As we keep on discovering things which we can do with it. Also, there are various meats which fulfil different nutritional requirements in our body. So in this article we have discussed the different types and categories of meat we usually consume. And what you can do with them.

Usually the meats which are red when uncooked are known as red meat. Mostly all the livestock comes under this category. Like beef, lamb, goat, pork. Also, the game meats or venison are also red meat.

Poultry comprises birds. And we also know this as white meat. So chicken, turkey, ducks, and even geese come under this category.

There has been a lot of discussion whether we can consider seafood as meat. As many people are giving up the different meat and adapting a pescatarian diet. But as you consume an animal anyway, it comes under meat. So fish, crustaceans and molluscs all come under this. Also, the crustaceans include crab, lobsters, shrimp, prawns, etc. And the molluscs include oysters, clams, mussels and scallops.

Further, we will discuss the many types of meat which we consume usually:

Probably the most common type of red meat we consume is beef. And this type of meat comes from cattle. Also, beef has different cuts and forms.

So the different cuts of meat include roast, short ribs and steaks. Furthermore, the steaks too, have different types as we cut them out from different parts of the cattle. Like sirloin steak, filet mignon, rib steaks, ribeye steaks, etc.).

But always make sure that you consume this meat sparsely. As it is rich in fatty acids like the oleic acid and may cause harm if consumed regularly.

The next red meat we will discuss is pork. So pork comes from farm bred domestic pig. And we can consume it both fresh and preserved. The best kind of pork is grayish, marbled and has an outer layer of fat.

So there is a recipe where the entire body of a pig is roasted. As we use the entire body for roasting, so a young pig is the best choice for that. And the pig’s age varies from two to six weeks known as a suckling pig. Also, the fresh pig can be cut. And we can make these cuts of pork chops or barbecue pork ribs.

Furthermore, the pork is also ground. And we can make the ground meat into Italian sausages.

When it is preserved and they are cured or smoked, we have bacon and ham. So ham comes from the shoulder or leg part. And we can also slice them to make charcuterie boards. Bacon comes from the loins and belly.

This kind of meat is high in vitamin B1 and omega-6 fatty acids. And pork is also easy to prepare.

Then the next red meat in line is lamb. Usually the lamb meat is from a sheep which is less than twelve months old. And the meat has less fat quotient and varies between a tender pink to a pale red colour. So you can make a simple roast lamb or lamb shanks from young lambs. Also, the cuts differ from shoulder chops, rib chops, loin chops to sirloin chops. And it has a decent amount of nutrients and is best for consumption.

A lamb which is over twelve months old, under 2 years, is known as hogget. And sheep older than that are also known as mutton. A lot of South Asian countries refer to goat meat as mutton too.

So the simple domestic goat gives goat meat. Although referred to as goat meat, this kind of meat also has variations. Usually the meat from bigger and adult goats is as chevon. And the meat from smaller young goats is ‘kid’.

As the goat is tough and also muscular, they are for making stews, So that you can let it simmer and cook for a while.

Apart from that, we can also roast them as a whole or made into mutton chops.

Next we have venison. In the earlier we referred to all the wild game animals’ meat as venison. But nowadays only the meat of a deer or elk is venison. So the venison is a rich red meat which is lean. Because of their life in the forest and a natural diet.

As they are game animals, their meat is not easily available. Only if you are a hunter, should you expect to find it. They are not grocery store meats. But you may find it in some markets or shops which specialise in selling venison.

So we can also cut the venison into different cuts like beef and pork. Like the roast, sirloins, steaks. Moreover, you can also grind the venison meat. As it is from a wild forest living animal, the meat is very flavorful and makes delicious burgers. Also, you can make sausages from this meat too.

Probably the most easily available type of meat is chicken. This is a type of white meat. And this is also really affordable when compared to the other meats. As a result of that the meat is vastly popular all over the world.

So chicken has protein quotients and low fat quotients. Hence, it does not cause a lot of problems for your health to consume frequently.

We can cook the chicken whole as a roast chicken.

And it is also cut down into wings, breasts, leg pieces, etc. So you can also individually roast the pieces. And the most famous recipe is ‘fried chicken’. As it has, many numbers of people are just hooked on it.

Holiday season means turkey on the table. So turkey meat comes from either domesticated or wild turkeys. Also, this meat is white meat. And has a good protein content and less fat.

During festivities like Thanksgiving and Christmas, it is a must. Specifically, in the region of North America.

So we can roast turkey as a whole. And this is pretty famous during the festivals.

So the next white meat we know is duck. And this comes from both freshwater and saltwater ducks. Moreover, they have a thick layer of fat in between the actual meat and the outer skin. So this layer gives better soaking of flavour characteristic to the duck meat. Also, duck meat is rich in protein and fat.

Usually we consume the breasts and legs of the bird. But sometimes a young duck is roasted as a whole too. As it keeps great flavour, braised duck legs taste great. When the legs are cured, we enjoy them as duck confit.

Also, the liver of the is flattened and eaten as the famous delicacy foie gras.

Although not a poultry bird, rabbit is also white meat. But it is not consumed as popularly as the other white meats. Also, rabbits can also come under game animals. This meat is rich in nutrients. And has a high quotient of Vitamin B12 and selenium and also has fewer calories.

So we can use the whole rabbit. And we cut them down into pieces. After which they are stewed or fried. Some countries also make delicious rabbit curries.

Apart from the venison, we also have other game animals like pheasants and even wild boars. And we consume these as game meats.

So the pheasant is a wild bird which has white meat. They are especially found in the British countryside. But are not only native to that place. We can consume pheasants as whole as a roast or as a casserole. Also, they are made into breasts fillets which facilitates easier cooking. As this meat has a texture, we can stuff it with fatty pork.

Another game meat that is popularly consumed is wild boar meat. So the wild boar has a rich and dark colour. It is red meat. And it has a nutty and rich flavor which is difficult to find in any other meat. So the roast of this meat gives you an amazing flavour. Also, you can prepare a stew with this meat. And you can braise the shanks to enjoy it.

Although many people are there who have given up meat, still consume fish. And considered as a pescatarian diet, fish is still meat. Almost all countries and regions in the world consume fish. And it provides a lot of protein, omega-3 fatty acids, Vitamin B, iodine and calcium.

So we cannot group fishes under any single group. As there are a lot of types, with different body structures, tastes and nutrients. We know a lot of fish as lean, but some of them are also fatty.

Fishes can be poached, grilled, broiled, baked, steamed or fried. And fishes have bones which are soft enough so that you can consume them. But a lot of them have bones which need to be removed.

The crustaceans include crab, lobsters, prawn, shrimps and crayfish. And they contain omega-3 fatty acids, good fats and minerals like zinc, iron, magnesium.

So the crab meat is delicate and sweet and got from inside the crab. And this meat can make crab sticks, crab cakes, curries, etc.

Next, the lobster meat comes from inside of a lobster. And you can make lobster skillet, butter seared lobster tails, lobster roll, etc.

Also, there are shrimps and prawns. All you have to do is remove the soft shell. And you can fried, butter seared, grilled or in curries.

We can also consume crayfish boiled, grilled or barbecued.

Then comes the molluscs or shellfish. And these are a source of Vitamin B12, omega-3 fatty acids, iron, selenium and zinc. Clams, oysters, mussels and scallops are major members of this category.

Clams are eaten raw, boiled or steamed. And many people also eat it fried or as a soup.

Also, you can eat oysters raw. Or you can smoke, boil, bake, fry, roast, steam or stew it to consume.

So you can cook the mussels in any way you like. You can smoke, boil, steam, roast, barbecue or fry it in butter or oil. Always make sure they are alive before you cook them.

Scallops have two flavours in one shell, the meat which is called scallop and the roe. And these can also be steamed, grilled and fried to enjoy.

In essence, we have categorized and mentioned a lot of different meats for you. But they are not every meat which you can consume. So basically we have talked about the most popular meats worldwide. And we hope we satisfy you with the article.

Also, you may have noticed that a lot of meats need to be ground or sliced. So cook that you can make the definite dishes or forms of meat. For that you will need meat, grinders and slicers. If you don’t have those yet, please get them. To know more about them, check our articles on the best meat grinders and best meat slicers for home use.